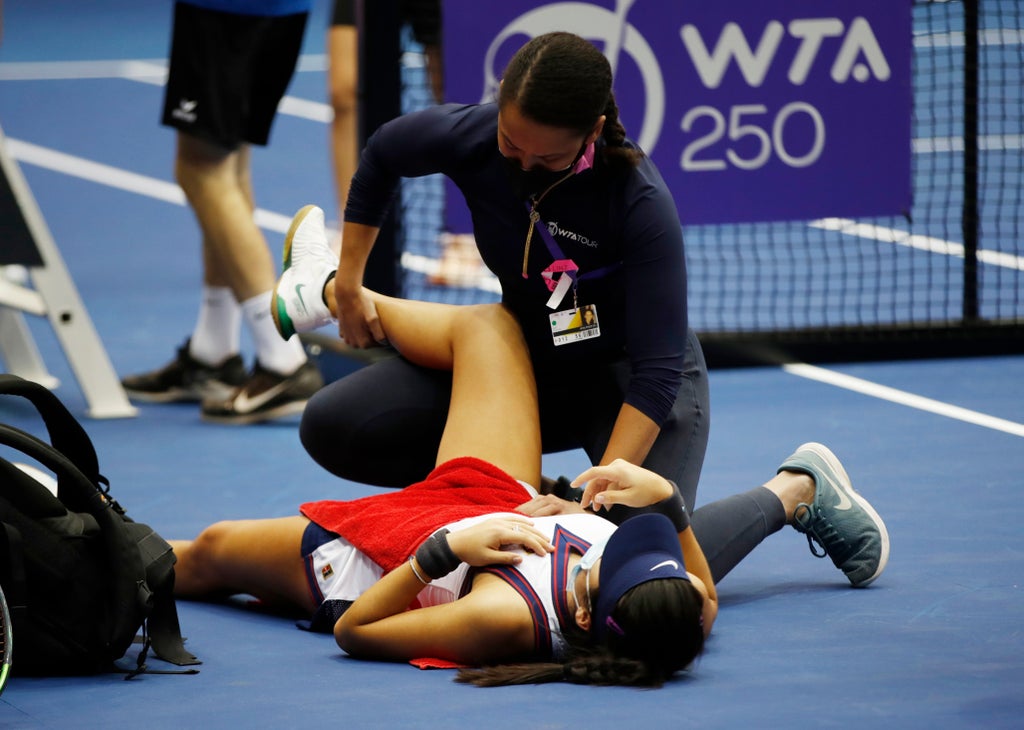 mma Raducanu suffered an injury scare as her season ended with a defeat to Chinese qualifier Wang Xinyu at the Linz Open.

After losing the opening set 6-1 in Austria, the 18-year-old fought back with a spirited 7-5 second set that included a 7-0 tie-break demolition job.

However, Wang broke back to lead 5-4 in the decider before Raducanu was treated for an apparent leg muscle issue. The top-seeded Brit continued in some discomfort before conceding a fresh break to end the first-round tie.

Raducanu will now take a little bit of time off to recharge and reflect on her remarkable progress before beginning work in pre-season with prospective new coach Torben Beltz.

She began with an ace and held serve in the first game but from there the first set sped by in the wrong direction, with Raducanu unable to find her range and Wang playing inspired tennis.

The 20-year-old was once ranked world No2 at junior level and has seen her progress stalled by injuries and difficulties travelling to and from China over the last 18 months.

But she has been in impressive form under new British coach Iain Hughes, including winning three matches here, and overpowered Raducanu from the baseline, seizing on any short balls and lapping up her opponent’s errors.

Raducanu improved in the second set, while Wang dropped from the stellar heights she had been inhabiting, and it went to a tie-break after the top seed twice failed to hold onto a break.

Her serving in particular was now really firing and, helped by a couple of generous errors from Wang, Raducanu finished the set with a run of 10 points in a row.

Wang found her best form again in the decider, though, and broke Raducanu to lead 5-4, after which the British No1 took a medical time-out for treatment to her upper right leg.

The timing was certainly unfortunate for Wang, while Raducanu did not look entirely comfortable, but she found some of her best tennis of the contest to save two match points and hit back to level at 5-5.

However, Raducanu could not hold onto her own serve again and Wang took her second chance to serve out one of the best victories of her career after two hours and 36 minutes.