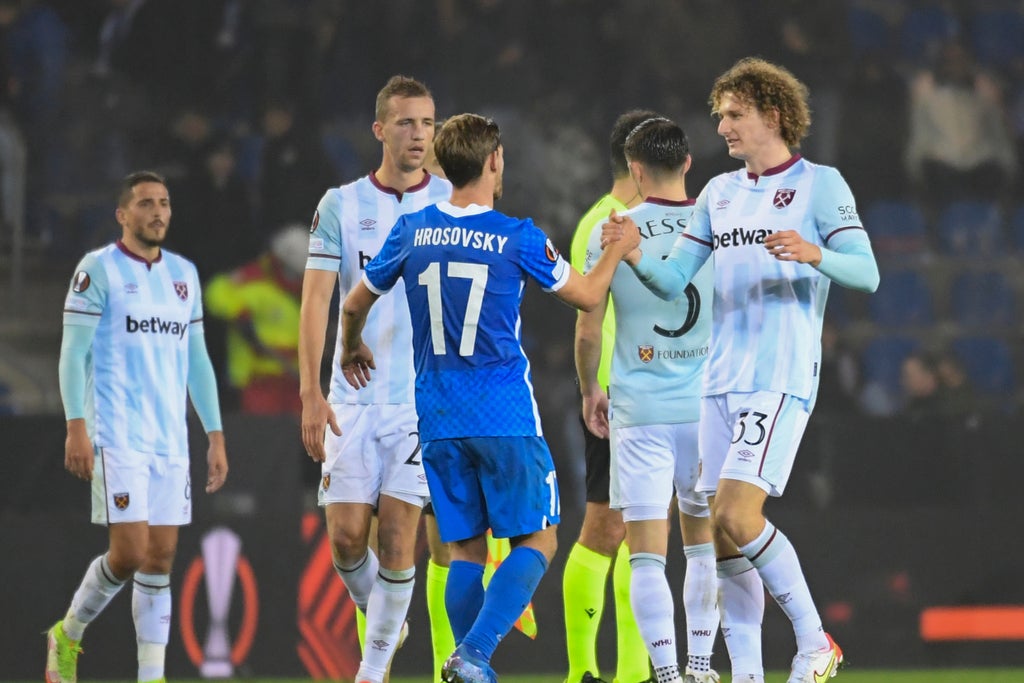 A brilliant double from Said Benrahma looked to have fired the Hammers into the knockout stages of the Europa League with two games to spare, though they faced a rather anxious wait and some daunting mathematics to work out where they stand.

The Hammers are all but through but could still be caught should Dinamo Zagreb and Rapid Vienna draw tonight.

West Ham have taken to European football with ease so far this season but faced their first real test here in Belgium. Moyes sent out a strong side with Michail Antonio and Declan Rice both starting as the Hammers looked to finish the job of qualifying.

The Scotsman joked this week that, at times, he is brought to tears by displays during games and the performances from some of his squad in the first half would certainly have had him in despair.

Rice and Mark Noble were caught out in midfield time and again while Issa Diop was far too slow to react when the lively Junya Ito fed a fine ball through for Joseph Paintsil. The forward then rolled Diop with ease and raced clear to fire at Alphonse Areola, who got a hand to it but could not stop the ball from going in off the inside of the far post. It was the first goal the Frenchman had conceded since joining West Ham.

The visitors paid for their shoddy start. The hosts, meanwhile, could have been two or three clear were it not for Areola following the opener.

The 28-year-old tipped Bryan Heynen’s header over the bar and was called upon from the resulting corner to deny Paul Onuachu, who twice headed over in the first half after sloppy midfield play.

Noble is a year older than Genk as a club and it showed as the Hammers skipper struggled and was guilty of sloppy play in the first half, though he was not alone.

West Ham managed to rally late in the first half with Benrahma and Rice both denied on the line before Moyes sorted them out at the break.

The Hammers stepped up and controlled the game after the break before Moyes went further and sent on a triple change with Soucek, Jarrod Bowen and Pablo Fornals sent on to liven things up.

A minute later and they were level, Benrahma starting and finishing a fine flowing move with a low drive under the goalkeeper.

The Algerian was putting on a show in the second half and claimed his brace with a stunning solo goal, lifting the ball around his man before going between the legs of the ‘keeper.

Benrahma’s brace was deserving of firing the Hammers into the next round of the Europa League, before Soucek’s late clanger.

The Czech has been blunt at the other end of the pitch without a goal since the opening day of the season at Newcastle and chipped in here with a needless diving header from Angelo Preciado’s cross which beat Areola and left Soucek and Rice flat on the floor.

Moyes will remain confident of safe passage to the knockouts after Christmas but as West Ham’s perfect record was put to an end here, he was served a reminder of the quality they will have to face on the continent.