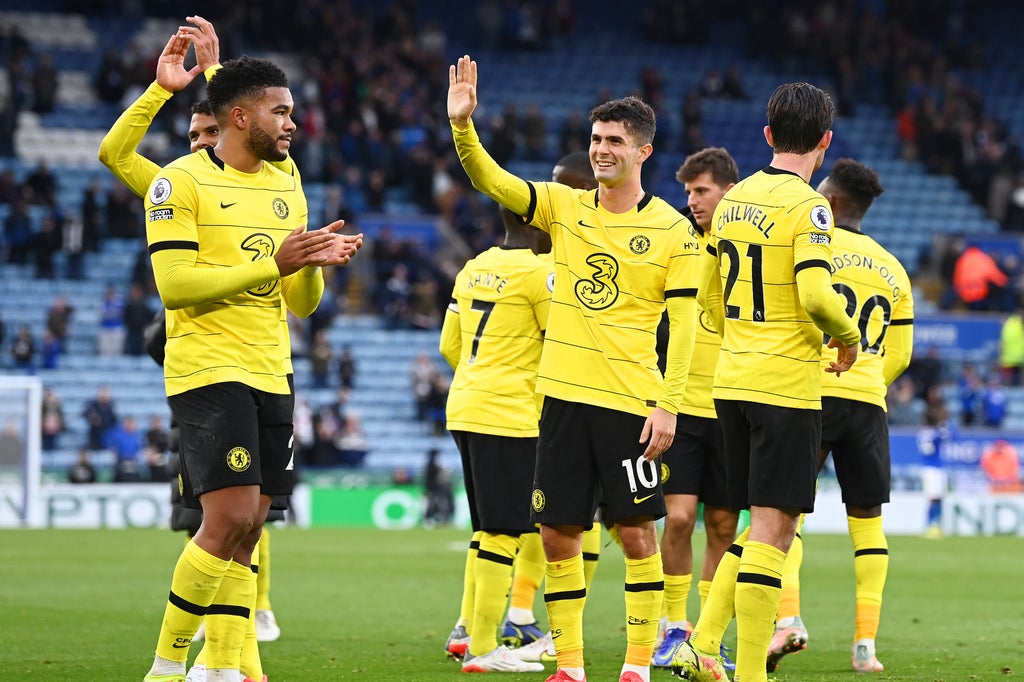 In Thomas Tuchel’s own words, nothing is decided in November. And it should not be forgotten that Lampard’s side had led the table just weeks before he was unceremoniously axed by the club he was such a legendary player for.

But this feels like a very different Chelsea to the one he departed in January – and that was emphasised with this 3-0 win at Leicester.

Tuchel has already delivered the Champions League – now he is on course for domestic success.

Manchester City and Liverpool will have much to say about that – but there is a relentlessness about Chelsea that Pep Guardiola and Jurgen Klopp will recognise. Because it bears the hallmarks of their own recent title triumphs.

“We’re top of the league!” the away fans chanted – and the question is: Who can knock them off their perch?

Chelsea appear to have the tools to handle just about anything put in front of them.

Injuries to Romelu Lukaku, Timo Werner and Mason Mount in recent weeks have done nothing to halt their march to the top.

Leicester might be struggling in the wrong half of the table after a difficult start to the season – but a lunchtime kick-off at the King Power remains a test of any team’s credentials.

Chelsea simply rolled over them.

Their margin of victory could easily have been doubled with marginal offside calls ruling out further goals, Kasper Schmeichel pulling off a couple of fine saves and Ben Chilwell hitting the woodwork.

They still might not have the flair of City or Liverpool, but Chelsea’s dominance of games is beginning to be more closely reflected by the goals they score.

This is the seventh time in the league this season that they have scored three or more goals in a game.

When Lukaku returns to full fitness and is properly integrated into the side he joined this summer, the expectation is that Chelsea will become even more of a potent force.

In the meantime they are finding goals from all areas of the pitch, which is precisely what title-winning teams do.

Toni Rudiger got them off the mark and register the 13th goal scored by a Chelsea defender in the league this season.

N’Golo Kante’s wonderful solo effort doubled their lead before half-time and Christian Pulisic came off the bench to round off the scoring after the break.

But it could have been so much more – and that is what is so tantalising about Tuchel’s team. They do not feel like the finished article. They do not like they are having to play to their limits to keep the points rolling in.

Rather it feels like a work in progress – one that is still some way from reaching its peak.

Until then, this will do just fine for Tuchel – and be the cause of significant concern to their rivals.

An early kick-off gave them chance to pile the pressure on Liverpool and City – moving six points clear at the top as a result.

They could have been ahead as early as the third minute when Jorginho found the overlapping run of Chilwell with a sweeping pass.

With a clear sight of Schmeichel’s goal, the full back went for power over precision, with his effort clipping the bar.

But it was a statement of intent and evidence of how easily they could get beyond the Leicester defence.

They were ahead after 14 minutes curtesy of another defender in Rudiger.

The German raced to the near post to meet Chilwell’s corner and flicked a header into the far side of Schmeichel’s net, leaving the goalkeeper standing.

Schmeichel was in action shortly after when denying Kante, who was put through one-on-one.

Kante did get on the score-sheet in the 28th minute with a goal of individual brilliance.

Picking up the ball just inside the Leicester half, he drove towards goal. With Kai Havertz ahead of him, it looked like a matter of time before he released his teammate.

Instead, with Jonny Evans ahead of him, he used the centre back as a guide to lash a shot inside the near post from the edge of the area.

Chilwell forced a save from Schmeichel early in the second half before Tuchel decided to make changes, with his side lacking the incisiveness of the first 45 minutes.

Pulisic and Hakim Ziyech came on for Havertz and the ineffective Mason Mount.

They combined shortly after for Chelsea’s third in the 71st-minute.

Ziyech twisted past Caglar Soyuncu before slipping the ball into the path of Pulisic to fire in from close range at the near post.

From then Chelsea could have added more, with the offside flag denying them repeatedly.

But the job was already done – and a message to their rivals sent.